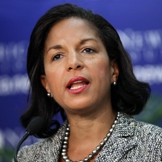 From January 2009 until assuming the role of National Security Advisor in July 2013, Ambassador Rice served as the U.S. Permanent Representative to the United Nations and a member of President Obama’s Cabinet. Under Ambassador Rice’s leadership, the U.S. Mission to the United Nations helped win the stiffest UN sanctions ever against Iran and North Korea, unprecedented action to prevent the proliferation of nuclear weapons and materials, support for life-saving interventions in Libya and Cote d’Ivoire, cooperation on the referendum for independence in Southern Sudan, vital UN assistance in Afghanistan and Iraq, and initial progress on reform of the flawed UN Human Rights Council.

Prior to serving as U.S. Permanent Representative to the UN, Ambassador Rice served as Senior Advisor for National Security Affairs on the Obama for America Campaign. From 2002-2009, she was a Senior Fellow at the Brookings Institution, where she focused on U.S. foreign policy, transnational security threats, weak states, global poverty and development. From 1997 to 2001, Ambassador Rice was the U.S. Assistant Secretary of State for African Affairs. In this position, she formulated and implemented U.S. policy for 48 countries in Sub-Saharan Africa In 2000, Ambassador Rice was co-recipient of the White House’s 2000 Samuel Nelson Drew Memorial Award for distinguished contributions to the formation of peaceful, cooperative relationships between states. From 1995-1997, Ambassador Rice served as Special Assistant to President William J. Clinton and Senior Director for African Affairs at the National Security Council at the White House. Previously, Ambassador Rice was a management consultant with McKinsey and Company and also served on numerous boards, including the National Democratic Institute and the U.S. Fund for UNICEF.

Ambassador Rice received her M.Phil (Master’s degree) and D.Phil. (Ph.D) in International Relations from New College, Oxford University, England, where she was a Rhodes Scholar. She was awarded the Chatham House-British International Studies Association Prize for the most distinguished doctoral dissertation in the United Kingdom in the field of International Relations. Ambassador Rice received her B.A. in History with honors from Stanford University, where she graduated junior Phi Beta Kappa and was a Truman Scholar. Ambassador Rice is married to Ian Cameron and has two children.

Susan Rice spoke to a near capacity crowd at the Yale Law School in the Levinson Auditorium on October 27, 2015. She then attended a reception in her honor at the TD Master’s House with Fellows of the College and other invited guests. A dinner with TD and other Yale students followed in the TD Dining Hall, after which she departed the campus. She spoke to the students attending the dinner about the development of her life interests and career.