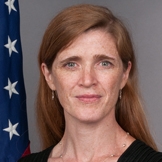 U.S. Permanent Representative to the United Nations
Chubb Fellow:
2014 to 2015

Ambassador Samantha Power is the U.S. Permanent Representative to the United Nations and a member of President Obama’s Cabinet.  At the United Nations, Ambassador Power works to advance U.S. interests, promote and defend universal values, and address pressing global challenges to global peace, security, and prosperity.

Prior to serving as U.S. Permanent Representative to the United Nations, Ambassador Power served as Special Assistant to the President and Senior Director for Multilateral Affairs and Human Rights on the National Security Staff at the White House.  In this role she focused on issues including UN reform; LGBT and women’s rights; the promotion of religious freedom and the protection of religious minorities; human trafficking; and democracy and human rights.

Before joining the U.S. government, Ambassador Power was the Anna Lindh Professor of the Practice of Global Leadership and Public Policy at Harvard University’s John F. Kennedy School of Government, teaching courses on U.S. foreign policy, human rights, and UN reform.  She was also the founding executive director of the Carr Center for Human Rights Policy.

Ambassador Power is the Pulitzer Prize-winning author of “A Problem from Hell”: America and the Age of Genocide (2002) and Chasing the Flame: Sergio Viera de Mello and the Fight to Save the World (2008), the basis for the award-winning HBO documentary, “Sergio.”  She is also the recent co-editor of The Unquiet American: Richard Holbrooke in the World (2011).  Ambassador Power began her career as a journalist, reporting from places such as Bosnia, East Timor, Kosovo, Rwanda, Sudan, and Zimbabwe, and contributed regularly to The Atlantic Monthly, The New Republic, the New York Review of Books, and The New Yorker Magazine.

Ambassador Power immigrated to the United States from Ireland at the age of nine.  She graduated from Lakeside High School in Atlanta, Georgia and received a B.A. from Yale University and a J.D. from Harvard Law School. She is married to Cass Sunstein, with whom she has two young children.

Ambassador Power spoke to a near capacity crowd at the Yale Law School in the Levinson Auditorium from 4:30 - 6:00pm. She then attended a reception in her honor at the TD Master's House with Fellows of the College and other invited guests. A dinner with TD and other Yale students followed in the TD Dining Hall, after which she departed the campus. She spoke to the students attending the dinner about the development of her life interests and career.