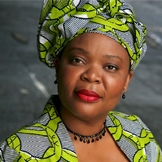 Leymah Gbowee is a Liberian peace activist responsible for leading a women’s peace movement that helped bring an end to the Second Liberian Civil War in 2003. Her efforts to end the war, along with her collaborator Ellen Johnson Sirleaf, helped usher in a period of peace and enabled a free election in 2005 won by Ms. Sirleaf.  Liberia became the first African nation to have a female president.  Ms. Gbowee, along with Ms. Sirleaf and Tawakkul Karman were awarded the 2011 Nobel Peace Prize for their non-violent struggle for the safety of women and for women’s rights to full participation in peace-building work.

An article on Ms. Gbowee in O: The Oprah Magazine, painted this backdrop:
“the (crises was the) result of economic inequality, a struggle to control natural resources, and deep-rooted rivalries among various ethnic groups, including the descendants of the freed American slaves who founded the country in 1847. The war involved the cynical use of child soldiers, armed with lightweight Kalashnikovs, against the country’s civilian population. At the center of it all was Charles Taylor, the ruthless warlord who initiated the first fighting and would eventually serve as Liberian president until he was forced into exile in 2003.”

In 1998, Ms. Gbowee became a volunteer within a program operating out of St. Peter’s Lutheran Church in Monrovia, where her mother was a women’s leader and Ms. Gbowee had passed her teenage years. It was called the Trauma Healing and Reconciliation Program (THRP), and it marked the beginning of Ms. Gbowee’s journey toward being a peace activist.

In the spring of 2002, Ms. Gbowee was spending her days employed in trauma-healing work and her evenings as the unpaid leader of Women in Peacebuilding Network (WIPNET) in Liberia. Falling asleep in the WIPNET office one night, she awoke from a dream where she says God had told her, “Gather the women and pray for peace!”   Some friends helped her to understand that the dream was not meant for others, as Ms. Gbowee thought; instead, she realized that it was a necessary for her to act upon it herself.

By the summer of 2002, Ms. Gbowee was recognized as the spokeswoman and inspirational leader of the Women of Liberia Mass Action for Peace, described as a peace movement that started with local women praying and singing in a fish market.  Working across religious and ethnic lines, she led thousands of Christian and Muslim women to gather in Monrovia for months. They prayed for peace, using Muslim and Christian prayers, and eventually held daily nonviolent demonstrations and sit-ins in defiance of orders from the tyrannical president at that time, Charles Taylor, who stepped down from power in 2003.  These efforts are chronicled in her memoir, Mighty Be Our Powers and in the documentary, Pray the Devil Back to Hell.

In June 2003, Ms. Gbowee led a delegation of Liberian women to Ghana to put pressure on the warring factions during the peace-talk process.  At first the women sat in a daily demonstration outside the posh hotels where the negotiators met, pressuring for progress in the talks.  When the talks dragged from early June through late July, with no progress made and violence continuing in Liberia, she led dozens of women, eventually swelling to a couple hundred, inside the hotel, where they simply “dropped down, in front of the glass door that was the main entrance to the meeting room.  They held signs that said: “Butchers and murderers of the Liberian people—STOP!”  The Liberian war ended officially weeks later, with the signing of the Accra Comprehensive Peace Agreement on August 18, 2003.  These efforts the beginninf of a new era.

Ms. Gbowee holds a M.A. in Conflict Transformation from Eastern Mennonite University (Harrisonburg, VA). She also received a Doctor of Laws (LLD) honoris causa from Rhodes University in South Africa and the University of Alberta in Canada, and a Doctor Honoris Causa in Specialty Management and Conflict Resolution from Polytechnic University in Mozambique. After receiving the Barnard College Medal of Distinction, she was named a Distinguished Fellow in Social Justice, a Visiting Transnational Fellow at the Center for Research on Women and Fellow in Residence at the Athena Center for Leadership Studies at Barnard College for the 2013/2014 academic year. Leymah is the proud mother of six children.

In an interview for the International Women´s Day, Ms. Gbowee expressed:
‘The Liberian women peace movement demonstrated to the world that grassroots movements are essential to sustaining peace; that women in leadership positions are effective brokers for peace; and the importance of culturally relevant social justice movements. Liberia’s experience is a good example to the world that women—especially African women—can be drivers of peace.”

Ms. Gbowee arrived in New Haven Friday, April 4. Master Jeff Brenzel greeted her and her assistant, Jamie Dobie, at the TD Master’s house where he presented her with a framed copy of the Chubb poster, which is also on desplay in the house. From there they walked together to the Yale Law School where they were greeted by over 300 students, Yale community members and others from around the state. Her talk was followed by questions lasting until 6:00 pm, when she returned to the TD House for a brief rest. She accompanied Master Brenzel to the LoRicco Ballroom for a dinner with TD Students, residential fellows, guests of the Fellowship, Yale students and visiting students attending the SanKofa54 3rd annual conference hosted by the Yale Association for African Peace and Development. Over 180 were in attendance. After the dinner, which featured native African dishes and decorations, Ms. Gbowee talked to the students about her life as an activist and a mother.